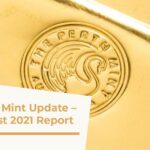 For this week’s update we will let the Perth Mint take the floor with a great summary of a very volatile month for precious metals. Manager of Investment Research at The Perth Mint, Jordan Eliseo covers whether or not gold is still an inflation hedge with some comments from billionaire John Paulson on why he’s bullish on gold prices moving forward. August 2021 also marked the 50-year anniversary for one of the most important events in gold’s recent history: when…

For this week’s update we will let the Perth Mint take the floor with a great summary of a very volatile month for precious metals. Manager of Investment Research at The Perth Mint, Jordan Eliseo covers whether or not gold is still an inflation hedge with some comments from billionaire John Paulson on why he’s bullish on gold prices moving forward.

August 2021 also marked the 50-year anniversary for one of the most important events in gold’s recent history: when President Nixon ended the gold standard in 1971. Ending the convertibility of the US dollar into gold was a real starting point for gold as an investment as it allowed an infinite supply of new USD dollars to be issued without a gold backing. The monetary system in the US was changed forever at this time and since then gold has averaged 8% gains per annum in USD terms.

The following is the complete extract from The Perth Mint’s latest report.

Volatility in precious metal markets picked up during August, with gold and silver prices at one point falling 8% and 9% respectively in US dollar terms. The two precious metals then rallied as August came to a close, with gold recovering almost all its losses to trade back above USD 1,800 per troy ounce, down just 1% for the month as a whole.

Silver finished the month trading back above USD 24 per troy ounce, down 6%, with daily movements in prices throughout August seen in the chart below.

The sell-off that occurred in early August, which can be seen in the above chart, was driven by a rapid liquidation that took place in the gold futures market on the morning of Monday 9 August.

In the space of one hour, more than 35,000 gold contracts (with a notional market value of over USD 6 billion) were traded, with more than half of the turnover happening in one 15-minute time slot. In that window prices fell 4% from USD 1,755 to USD 1,677 per troy ounce.

While much speculation has taken place as to what drove that level of turnover in such a short time frame, the data makes it clear that the market hit an air pocket of sorts, with the drop driven predominantly by a short-term lack of liquidity. The fact that gold recovered a good part of the losses within the day reinforces this view.

Indeed, the sharp sell-off seen on 9 August may end up marking the completion of the corrective cycle in gold, with the metal rallying more than 8% since. Multiple factors have driven the rally, including:

• The threat posed by the COVID-19 Delta strain, with the daily case rate in the United States back above 150,000 and continuing to surge, despite the fact almost 65% of the adult population has been fully vaccinated.

• Heightened geopolitical tension in the wake of the withdrawal of American and other coalition troops from Afghanistan.

• A continued dovish tone from the US Federal Reserve, with Chairman Jerome Powell using the annual Jackson Hole Symposium to reassure markets the Fed is in no rush to begin tapering asset purchases, let alone normalise monetary policy in any meaningful sense.

The speech from Powell noted that while the US job market was recovering, there was still a long way to go. He also reiterated the Fed’s view that the recent spike in inflation will prove transitory (more on this below, where we discuss whether or not gold remains an inflation hedge).

It was enough to boost stock markets, cause a fall in the US dollar, and ultimately, help boost gold back over USD 1,800 and silver back above USD 24 per troy ounce as August came to a close.

IS GOLD STILL AN INFLATION HEDGE?

Five decades of market data tells us conclusively that gold tends to perform well during periods of higher consumer price inflation (CPI), with average annual increases in excess of 15% per annum in the years CPI rates are 3% or higher.

However, given gold has been in a corrective cycle since peaking above USD 2,000 per troy ounce in August last year, and given this time period has coincided with an uptick in CPI, questions about whether gold is still an inflation hedge continue to be asked in financial blogs, podcasts etc.

We are encouraged by the very fact this question is getting airtime, as it’s the kind of thing you only see when sentiment toward gold has soured and when prices have eased, which is often a good time to be buying.

As we highlighted last month, there are multiple factors that have contributed to gold falling in the last year despite the uptick in inflation – from soaring stock prices to the market’s belief that the current surge in inflation will prove transitory.

This month we want to delve a little deeper, looking at the difference between current annual rates of CPI, and the market’s expectation for average inflation over the next 10 years (called the breakeven rate). As per the table below, there is now a 3% gap between current CPI, which was 5.4% in July, and the 10-year breakeven rate.

The chart below, which dates back to 2003, shows the difference between these two readings on a monthly basis, as well as the gold price itself over the same time period.

The standout observation from the chart is that the inflation differential between CPI levels and the 10-year breakeven rate, which is 3% right now, is as pronounced as it was back in Q3 2008, around the time the Global Financial Crisis hit.

History shows that equities fared horribly in the period that followed, falling by 40% over the next six months. Gold, on the other hand, went from strength to strength, rallying by more than 100% in the three years that followed.

The chart, and the fact the market doesn’t think that the current high rates of CPI will last, is encouraging for another reason. Markets don’t react to formal data releases like CPI, GDP, or employment figures – they react based on what a data release is relative to what the market expected the data release to be.

As such, even if inflation rates do ease in the months ahead, it may not negatively impact gold at all, as the market already expects this to happen.

For those unfamiliar with the name, John Paulson was one of the few investors that not only foresaw the problems in the US housing market that would culminate in the sub-prime crisis and the GFC, but also put his money on the line, making billions of dollars in the process.

He has also long been a fan of gold, with the below extract from a recent interview with Bloomberg (subscription required ), highlighting his current view on the precious metal.

Bloomberg: “After you made your famous trade, you bought a lot of gold, or gold futures, and you were called by some a gold bug. Gold’s now about $1,700 an ounce. Do you think that gold is a good investment at this price?”

Paulson: “Yeah, we do. We believe that gold does very well in times of inflation. The last time gold went parabolic was in the 1970s, when we had two years of double-digit inflation.

The reason why gold goes parabolic is that basically there’s a very limited amount of investable gold. It’s on the order of several trillion dollars, while the total amount of financial assets is closer to $200 trillion. So as inflation picks up, people try and get out of fixed income. They try and get out of cash. And the logical place to go is gold. But because the amount of money trying to move out of cash and fixed income dwarfs the amount of investable gold, the supply and demand imbalance causes gold to rise.”

Bloomberg: “So, you’re a big believer in gold as a good investment now?”

Paulson: “Yes. We thought in 2009 with the Fed doing quantitative easing, which is essentially printing money, it would lead to inflation. But what happened was while the Fed printed money, at the same time they raised the capital and reserve requirements in banks.

Paulson isn’t the only high-profile investor singing gold’s praises, with Mark Mobius, who spent the better part of 30 years managing emerging market portfolios, and once served as the executive chairman of Templeton Emerging Markets Group, recently stating investors should hold up to 10% of their portfolios in gold.

Like Paulson, Mobius sees the value in holding gold given the potential for significant currency devaluation in the years to come.

August 2021 marks the 50-year anniversary of the closing of the “gold window”, with then US President Richard Nixon ending the convertibility of the US dollar into gold. Since then, the price of gold has risen by approximately 8% per annum, outperforming a range of traditional asset classes over this period.

Alongside the strong long-term returns, gold has also offered investors:

• An effective equity market hedge and portfolio diversifier, with gold typically being the best performing asset whenever equity markets suffer their most significant corrections.

• Accessibility, with gold being an asset class that every investor can include in their portfolio, irrespective of their budget.

We discussed some of these themes in significant detail in a separate blog post published to commemorate the 50 years since Nixon’s momentous decision.

While none of these attributes guarantee what will happen to the gold price from one day to the next, in time they can all be expected to support gold demand, and therefore prices, especially given the continued uncertainty plaguing the global economy, the monetary environment we are in, and how expensive financial markets as a whole are.

For this reason, we remain optimistic on the outlook for gold over the medium to long-term and why we think that alongside silver it will continue to play an important role in diversified portfolios.

Guardian Gold is the bullion trading division within our Melbourne and Sydney Guardian Vaults facilities. Guardian Gold is an authorized distributor of both The Perth Mint and the Royal Australian Mint in Canberra. We provide a seamless solution for buying, storing, and selling precious metals all within the safest and most secure locations in Australia.