Why the Federal Reserve Will Fail

Home > Why the Federal Reserve Will Fail 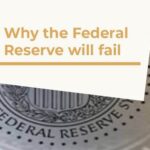 Why the Federal Reserve Will Fail

News this week is dominated by what is being referred to as ‘China’s Lehman Brothers moment’. Property developer Evergrande shares are plummeting as there is no word from Beijing about a bail out package as yet. Finally, we are seeing this volatility spill over into other markets with the ASX down by 2% on Monday and iron ore futures getting crushed. Gold and silver have been caught up in the chaos with a flight to safety heading towards the US…

News this week is dominated by what is being referred to as ‘China’s Lehman Brothers moment’. Property developer Evergrande shares are plummeting as there is no word from Beijing about a bail out package as yet. Finally, we are seeing this volatility spill over into other markets with the ASX down by 2% on Monday and iron ore futures getting crushed.

Gold and silver have been caught up in the chaos with a flight to safety heading towards the US dollar, for now. Gold seems quite steady in $AUD terms above $2,400 and silver is caught up in the panic, down circa 6% in recent days and perhaps an opportunity for those waiting for a dip.

The question will be: what sort of bail out package will China come up with? As no doubt they cannot let Evergrande go under completely. Many state-owned enterprises will be most likely called upon to provide some level of safety net. For local precious metal investors, keep an eye on the AUD/USD which is coming under a lot of pressure.

Apart from the Evergrande story, the other major focus is on the Federal Reserve ‘tapering’ back its bond buying program. We explain below why investors shouldn’t take the threat of tighter monetary policy too seriously.

THERE’S NO TURNING BACK FOR THE FED

One common theme or problem with financial media, is that a lot of the time they only ever report on what Federal Reserve officials say. They never question what was said, or even provide the slightest opinion on the matter. Central Banks are seen as the experts, so no matter what they say it must be correct, right? Well, maybe not. Many Central Bank members have appalling track records when it comes to forecasting interest rates or major economic events. Just look at Bernanke in the few years preceding the GFC. They are wrong just as often as they are right, so why do we take their words as gospel?

The latest fixation of financial markets (and one that is hurting gold and silver prices currently) is the belief that the Fed can start tapering back its bond buying program with the eventual goal of taking QE away permanently and normalising interest rates.

The truth is, if we look back on the last decade, for the vast majority of it, the Fed has been talking about normalising interest rates and ending QE the entire time. Yet here we are today with interest rates at zero and a Fed balance sheet that has swelled to almost $9 Trillion US dollars.

If we take a look back at some of the headlines over the last decade, we can see that the experiment of Quantitative Easing (QE) was created to only be a temporary solution. See for reference some of the snippets from financial media since 2009:

We are constantly bombarded with messages and warnings from the Federal Reserve that stimulus will one day end, and interest rates will rise. But they are starting to sound like the boy who cried wolf.

Finally, after talking about it since 2009, the Fed did manage to raise interest rates temporarily in the period between 2015 and 2019, however it did not shrink its balance sheet in a meaningful way during this time, and it had to quickly reverse course as the economy started slowing as a result. It was actually in 2019, before the covid crisis, when the US economy started slowing and the Fed was forced to cut rates from 2.5% to 1.5% in response. Many would forget this period as it was overshadowed by the covid crisis in 2020 where rates were cut instantly back to 0%.

By the time the Fed had given up on this latest rate hike cycle, the Covid crisis hadn’t even happened yet.  Nonetheless it was obvious that higher interest rates across the economy could not be handled by the enormous debt levels that were built up since the GFC. We already had the answer that The Fed couldn’t normalise rates in 2019, so why is everyone so petrified about the coming tapering? The Fed cannot tighten monetary policy in a meaningful way with the US debt/GDP ratio at the highest point in history.

The whole idea or concept described by Fed economists; of using monetary and fiscal stimulus in times of crisis then simply reversing course when the economy is strong, is a false science. It’s not that simple. Personal, household, corporate and government debt levels build up so quickly during a stimulus cycle that you cannot simply wind back the stimulus without creating a credit crunch and major economic crisis as a result. They might slow down their QE program in the short term, but QE is here to stay. It has become an integral component that prevents the US economy from collapsing under its own debt burden.

The balance sheet of the Fed is never going back to zero. QE is not a temporary solution to an economic problem; it has become a permanent life support system.

So, here’s what will happen. The Fed may taper, but only temporarily. The Fed may raise interest rates slightly, but again, only temporarily. The next attempt to tighten monetary policy and to normalise interest rates on a permanent basis will end in the same result. It’s either an economic depression that results, or Central Banks once again change their course and head back to zero or negative rates once more. The sooner people realise this, the sooner they can stop being scared by the never-ending headlines about Fed tightening that is supposedly coming in a year or two, like the one below:

If you have any feedback or questions about this report, you can contact John Feeney direct at johnf@guardianvaults.com.au

Disclaimers: Guardian Gold, Registered Office, Scottish House, 100 William Street, Melbourne, Victoria, 3000. ACN 138618176 (“Guardian Vaults” & “Guardian Gold”) All rights reserved. Any reproduction, copying, or redistribution, in whole or in part, is prohibited without written permission from the publisher and/or the author. Information contained herein is believed to be reliable, but its accuracy cannot be guaranteed. It is not designed to meet your personal situation. Guardian Gold, its officers, agents, representatives and employees do not hold an Australian Financial Services License (AFSL), are not an authorised representative of an AFSL and otherwise are not qualified to provide you with advice of any kind in relation to financial products. If you require advice about a financial product, you should contact a properly licensed or authorised financial advisor. The information is indicative and general in nature only and is prepared for information purposes only and does not purport to contain all matters relevant to any particular investment. Subject to any terms implied by law and which cannot be excluded, Guardian Gold, shall not be liable for any errors, omissions, defects or misrepresentations (including by reasons of negligence, negligent misstatement or otherwise) or for any loss or damage (direct or indirect) suffered by persons who use or rely on such information. The opinions expressed herein are those of the publisher and/or the author and may not be representative of the opinions of Guardian Gold, its officers, agents, representatives and employees. Such information does not take into account the particular circumstances, investment objectives and needs for investment of any person, or purport to be comprehensive or constitute investment or financial product advice and should not be relied upon as such. Past performance is not indicative of future results. Due to various factors, including changing market conditions and/or laws the content may no longer be reflective of current opinions or positions. You should seek professional advice before you decide to invest or consider any action based on the information provided. If you do not agree with any of the above disclaimers, you should immediately cease viewing or making use of any of the information provided.

Guardian Gold is the bullion trading division within our Melbourne and Sydney Guardian Vaults facilities. Guardian Gold is an authorized distributor of both The Perth Mint and the Royal Australian Mint in Canberra. We provide a seamless solution for buying, storing, and selling precious metals all within the safest and most secure locations in Australia.